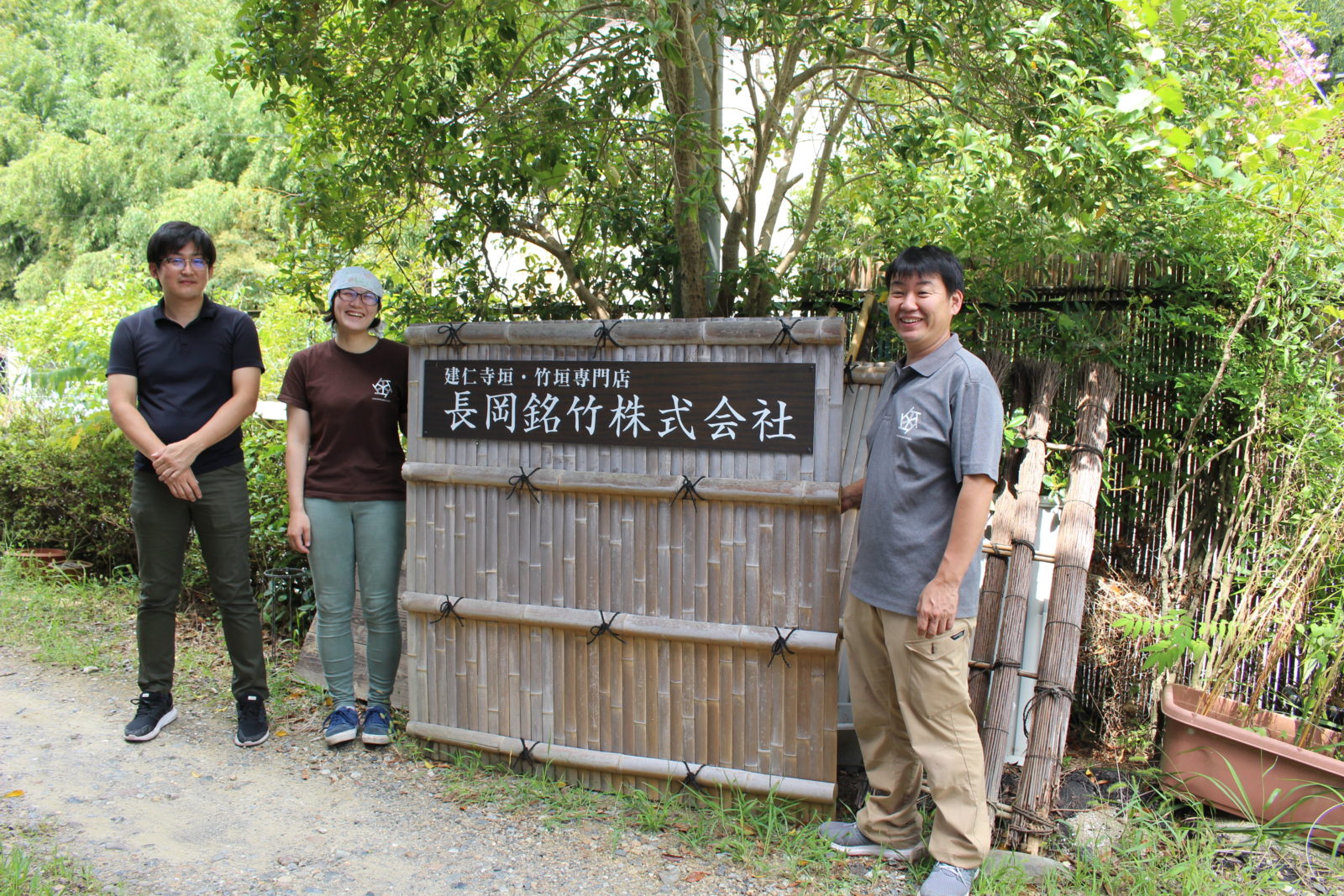 On the banks of the river in the Hozucho neighborhood of Kameoka, Kyoto, stands the studio of the bamboo fence specialists at Nagaoka Meichiku.

Headquartered in Mukou City, with studios in Ooyamazaki-cho and Kameoka, Nagaoka Meichiku is a company that specializes in building and maintaining bamboo fences using materials of the finest quality and with the highest technical finesse. The company has built and maintained the fences at many historical temples and shrines in the Kyoto area. 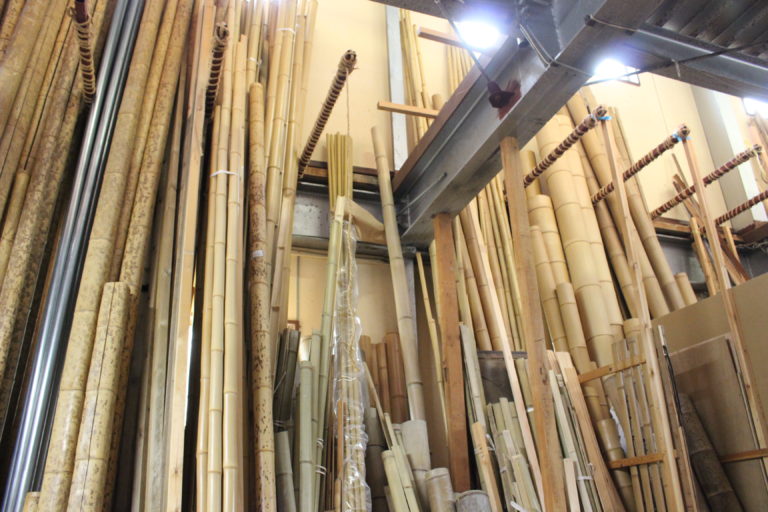 Headquartered in Mukou City, with studios in Ooyamazaki-cho and Kameoka, Nagaoka Meichiku is a company that specializes in building and maintaining bamboo fences using materials of the finest quality and with the highest technical finesse. The company has built and maintained the fences at many historical temples and shrines in the Kyoto area.

In this installment, we sat down and talked with one of the company’s craftsmen, Akihiro Mashimo. 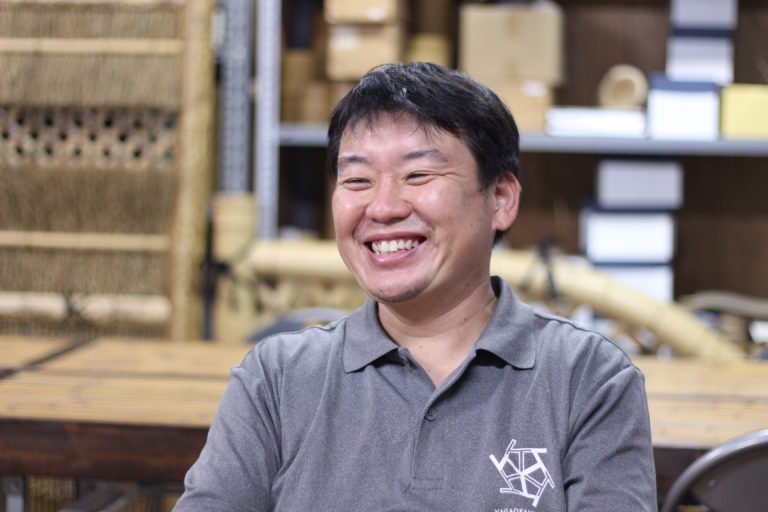 A Fateful Meeting with Bamboo

Mashimo has been an employee of Nagaoka Meichiku for over 20 years, working as a craftsman as well as in advertising and sales. We asked him just how he came to be involved with bamboo.

“After graduating high school, at first I wanted to work in pottery; so I attended an open campus event at a technical arts university. There were a lot of different art courses there, but for some reason, bamboo looked really cool and interesting to me. Why bamboo appealed so strongly to me at that time, I still don’t know.”

Taken with the charm of bamboo, he declared on the spot to the school staff, “I want to study bamboo!”

Just as he had declared on that fateful day, he did a two-year course at the Kyoto Traditional Technical Arts University in Nantan, Kyoto. Ever since that day, he has remained devoted to bamboo without any interest in other arts. During his two years at school, he studied how to make things like flower vases, tea ceremony utensils, and bamboo fences; all the while, he became more and more interested in bamboo.

After graduating from university, Mashimo soon began working at the company run by his bamboo-working professor, Nagaoka Meichiku. More than 20 years have passed since then, and he is still working with bamboo and continuing to contribute to the company.

Unexpected Ways to Use Bamboo Fences 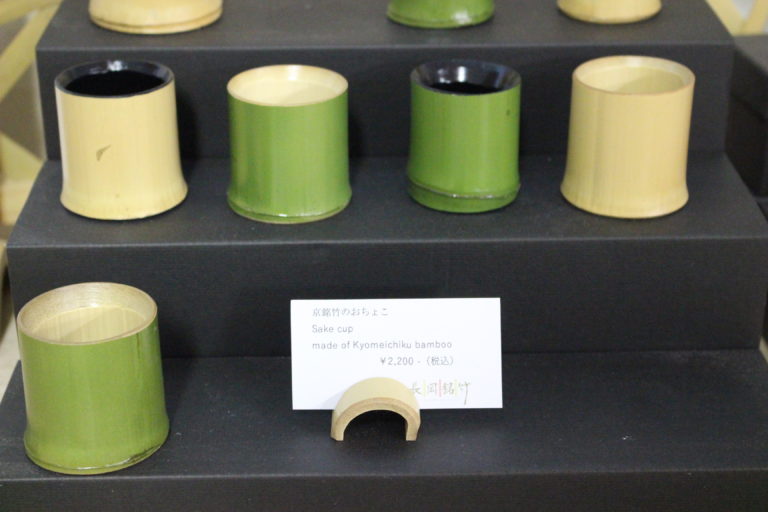 While the bamboo fences that Nagaoka Meichiku specializes in are most often seen in the Japanese gardens of temples or Japanese-style inns, surprisingly, many of the orders that the company receives are from regular residential houses. 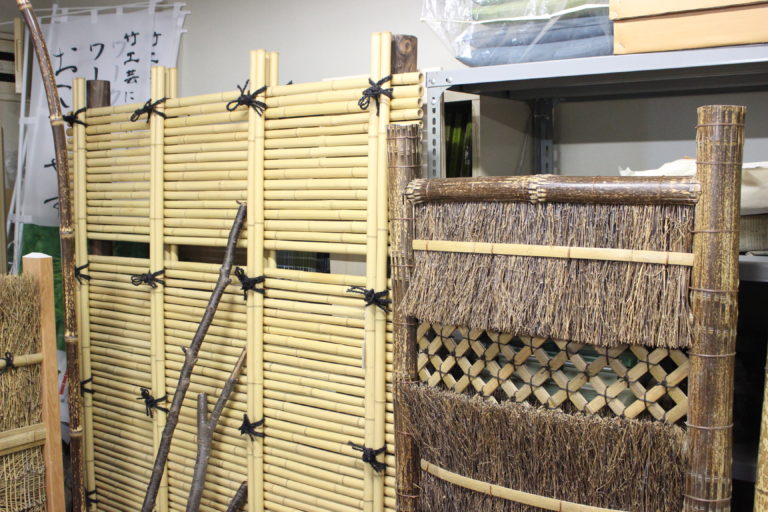 “Bamboo fences are great for hiding things that you don’t want people to see, like your home’s gas meter or a clothes line. Once more people become aware of these practical applications, I think there will be more demand for this kind of fence.”

It’s true: if the number of houses with bamboo fences were to increase, the scenery would likely be better, and the town would be more eco-friendly.

Mashimo is spreading the word about bamboo’s appeal in the hopes that people will feel comfortable about using it in their homes.

Posting on Social Media Has an Unexpected Result

Mashimo has been actively promoting bamboo craftsmanship on social media.

“The other day I was working on a style of bamboo fence called inuyarai. Afterwards, I uploaded some pictures of the fence, and got a message from someone who saw the post. This person asked about using the inuyarai style of fence to prevent children from climbing over the railings on verandas and falling down.” 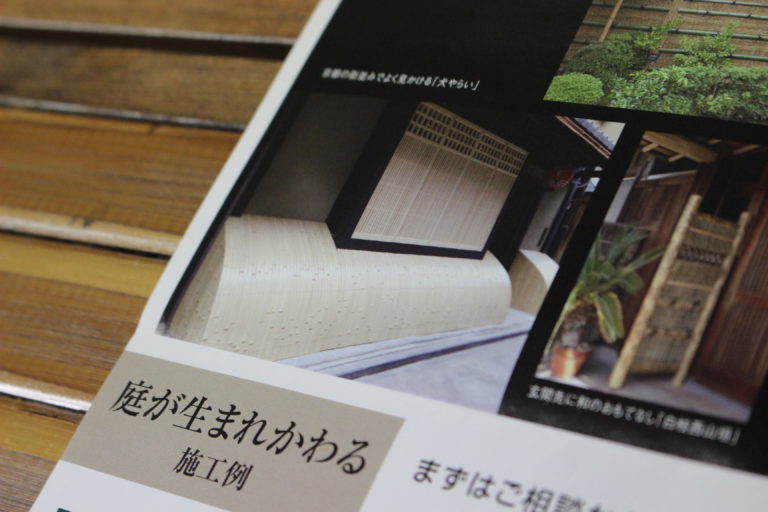 This person was contacting him on behalf of an organization that works to prevent accidental falling deaths.

“The call made me realize that inuyarai fences could stop children from reaching the railing of a veranda, and in turn, prevent falling accidents.

They look nice, too. It’s really something how these kinds of connections come about through social media.”

All the posts he has made of his work have led to a steady stream of new jobs. This episode showed Mashimo the possibilities of bamboo fences in a new era. 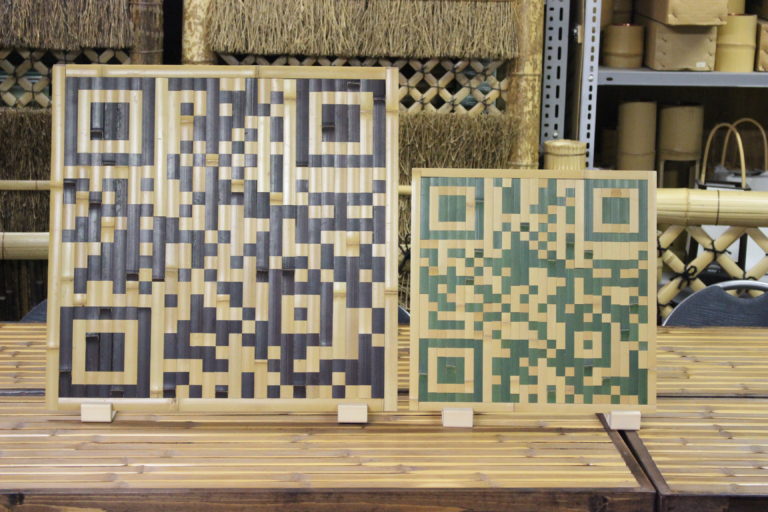 “I made the bamboo QR code based on an idea I got from Mr. Kobayashi at Woodland Kyoto DMO. Using something analogue made from bamboo to jump to a digital website on your smart phone makes for an interesting story.”

However, he said the weave wasn’t tight enough at first. Cell phones couldn’t read the codes due to the gaps in the bamboo. After some trial and error, he was able to make it work. That gave him a great sense of achievement.

Adding Something Extra to Products

Mashimo didn’t want to just sell things; he wanted to offer items that had something “extra.” After consulting with some of his friends and colleagues, he became aware of “SDGs.”

“SDGs” (Sustainable Development Goals) were adopted and propagated in 2015 by the United Nations General Assembly with the hope that all nations would work together to make them possible. The goals address problems such as poverty, education, and maintaining responsible consumption and production, along with many other areas. In all, there are 17 interlinked goals that the UN would like all countries to achieve by the year 2030. 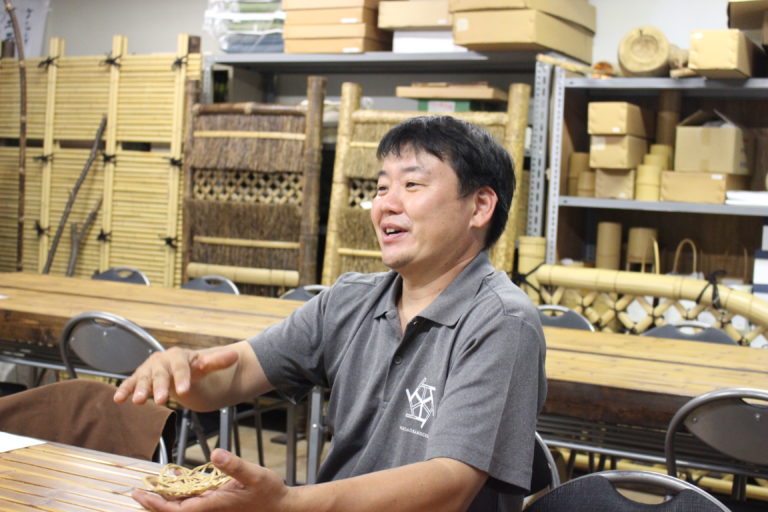 Bamboo decomposes and returns to the soil. From that soil, the bamboo grows again and may once again be used. This cycle has been a central theme of our lifestyles since olden times.

Mashimo feels like this feature of bamboo perfectly meets the aims of the SDGs, and he decided to sell bamboo QR codes to businesses that are also striving to meet the guidelines set out by the SDGs.

“Because bamboo is kind to the environment and has a deep connection to the SDGs, I thought that a company that displays this bamboo QR code can point to it as proof that they are also contributing to the achievement of SDGs.”

In 2019, the bamboo QR codes were featured on Yahoo! News and they soon became a topic of conversation. The company received an order for the QR code from Adventure World, a theme park in Wakayama. 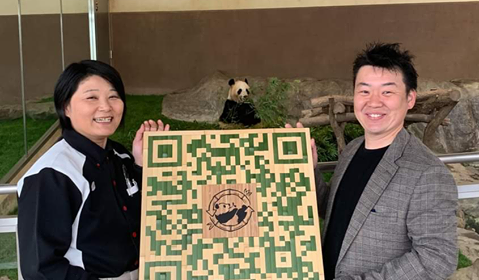 Adventure World is also working towards achieving SDGs in many other ways. When looking at Adventure World, we can catch a glimpse of what a company that works hand in hand with nature looks like.

If you go to Adventure World, please keep an eye out for this QR code!

Making the World Smile with Bamboo

We asked Mashimo about his plans for the future.

“We have always taken the phrase ‘make the world smile with bamboo’ as our goal. Any way that achieves this goal is good; bamboo fences, small bamboo accessories, or events that use bamboo. Anything is okay!”

Because he knows more about bamboo’s appeal and possibilities than anyone, Mashimo is able to say with confidence that bamboo can make people’s lives brighter and put a smile on their faces.

Among the things the company offers to get more people to personally connect with bamboo is an experience where you can make a small bamboo accessory.

At the Nagaoka Meichiku studios, you can also have the experience of making your own pair of chopsticks. 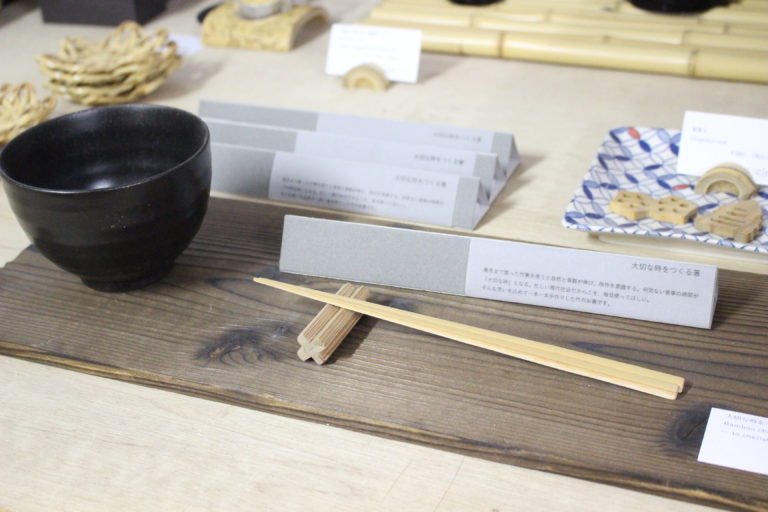 The experience includes the following:

The ends of bamboo chopsticks can be filed down to fine points, which makes it easy to pick up even a single grain of rice. Also, they are very light and easy to pick up. 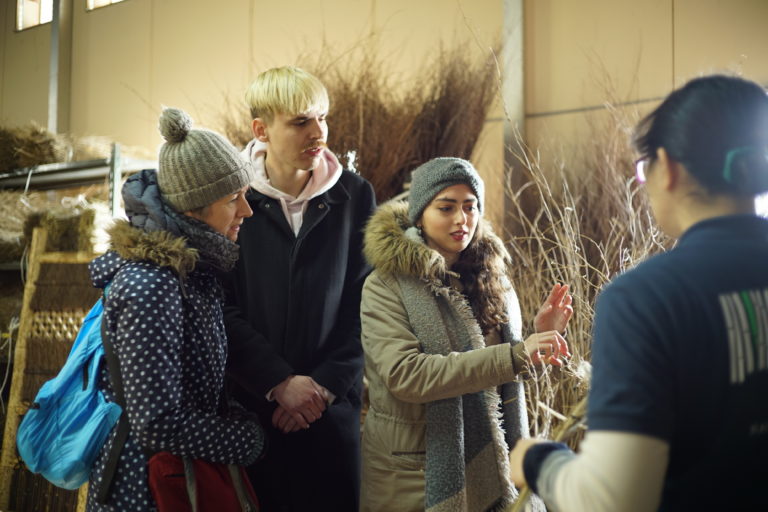 By feeling the warmth of Mashimo’s personality, and by working with the bamboo yourself, you too will begin to understand the unique charm of bamboo.

By all means, make your way to Nagaoka Meichiku and feel it for yourself! 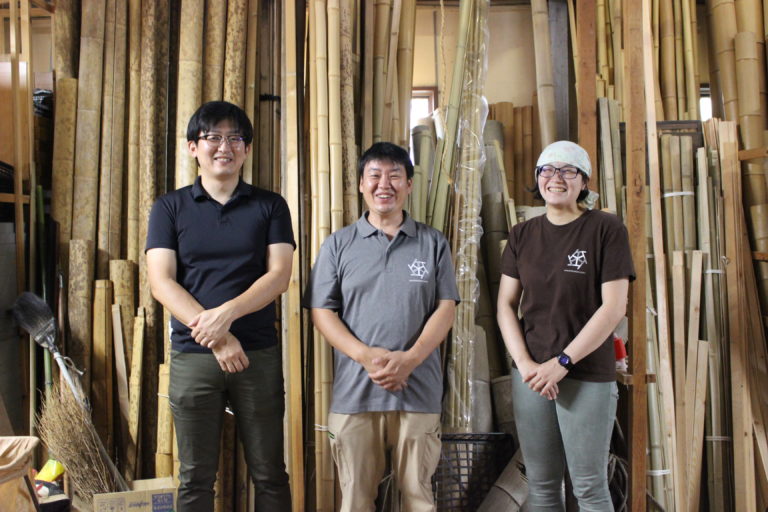