LocalsPushing forward with an insatiable spirit of curiosity and innovation,
Kyoto Hozuai Studio, Inc. is enchanted with dyed textiles. 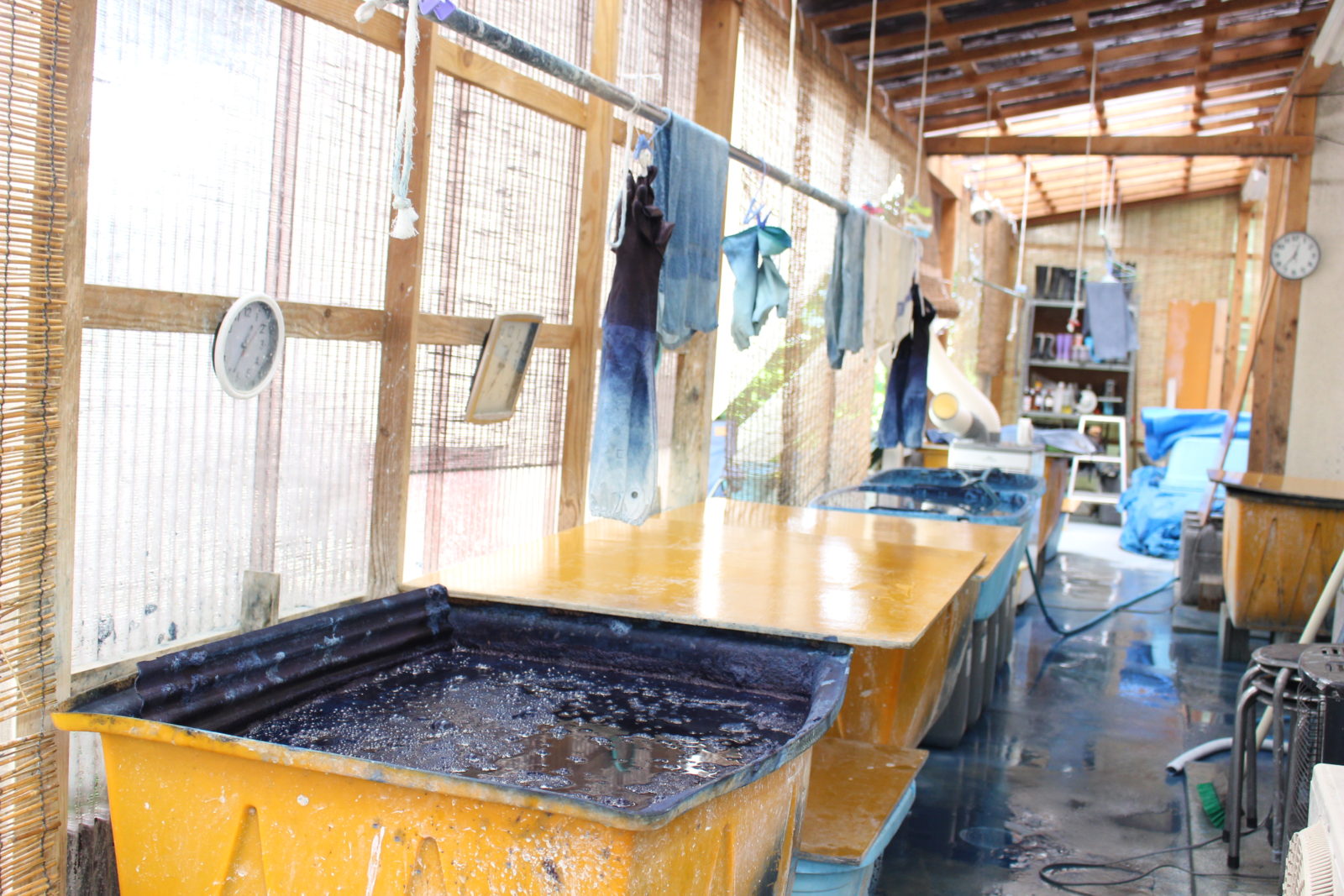 Hozuai Studio is located beside the Hozu River in Hozu-cho, Kameoka, Kyoto. Founded in 2015 with the cooperation of the Hozu-cho Residents’ Association, many indigo-dyed textiles are displayed and sold here.

In this installment, we sat down and talked with the president of Hozuai Studio, Keiichi Yoshikawa.

Indigo-Dyed Products Continue to Change with the Times 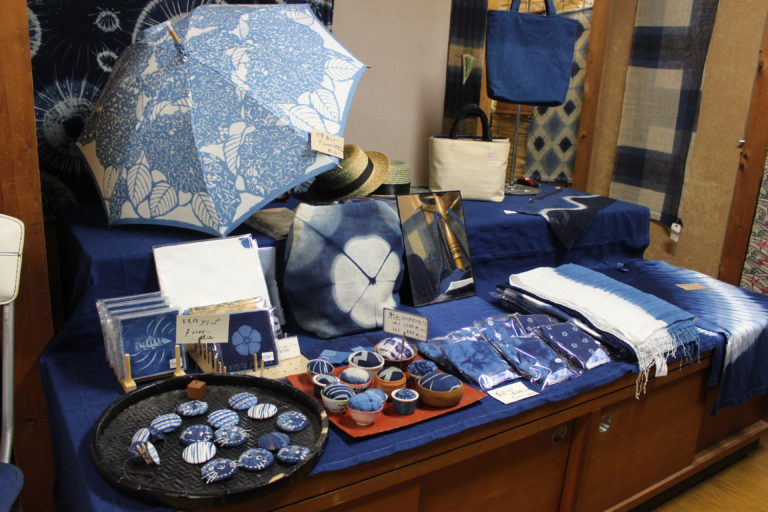 Coincidentally, in February 2020 – before COVID-19 had caused much of a stir – Hozuai Studio had already come up with the idea for indigo-dyed masks.

“When we were thinking of new product designs, one of the members of our staff suggested that we try making masks from indigo-dyed cloth. There were people both for and against the idea, but in the end, we decided to give it a try and started making them. While we were doing that, the COVID-19 pandemic broke out, and the demand for masks instantly increased.”

In indigo dye, there are various functional ingredients that have antibacterial, anti-inflammatory, and anti-cancer properties. These benefits make indigo dye a perfect match for masks. 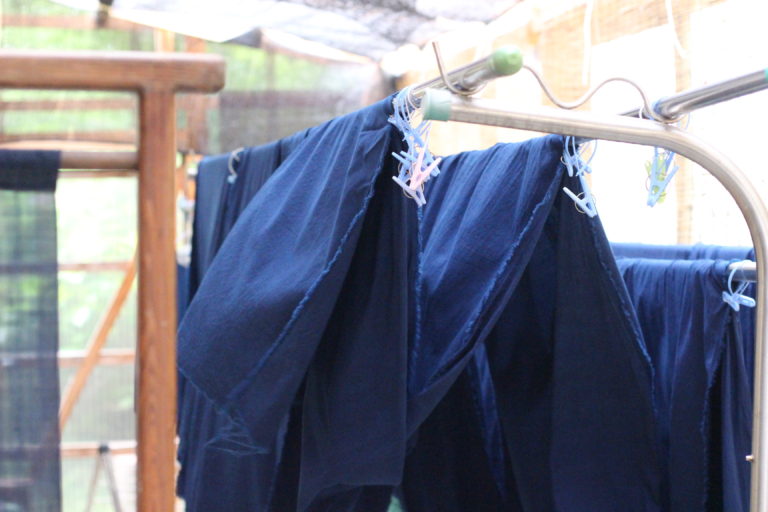 This mask was picked up by the media, and it received an enthusiastic response (from customers).

“We’d hate for people to think we were trying to profit from the coronavirus. We just want to help people as much as we can, so we’re trying to keep the price down as much as possible.”

In addition to masks, Kyoto Hozuai Studio is actively creating products to fit the times. 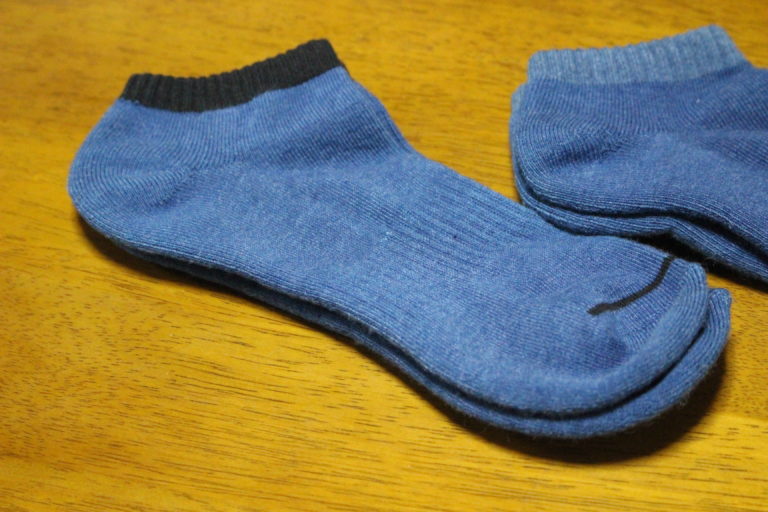 Beginning July 1, 2020, stores nationwide stopped providing plastic bags to customers.
“Since Kameoka is working to quickly reduce plastic waste, we have been preparing to promote our Indigo-dyed tote bags. We are working with the souvenir shops that will carry them on the designs,” said Yoshikawa.

The Bubble Era: Into the 1-trillion Yen Kimono Dyeing Industry

Mr. Yoshikawa said he was learning woodblock art at an art university.

You may think it odd that he went from learning woodblock art straight into dyeing work, but at the time, it was difficult to earn a living in woodblock art. This was during the bubble era, so when he had a chance conversation with a friend who had struck out on his own making kimono, he told us,

“My friend said he was making 50,000,000 yen a year. It was at that moment that I realized that I definitely had to get into the kimono business. I could do woodblock art as a hobby.”

With that, he gave up woodblock art and went to work at “Kuriyama Studio” in Kyoto City, Ukyo Ward.

“At Kuriyama, they were making kimono using a technique called bingata, a technique that employs a pattern that uses repeating nature motifs such as fish, flowers, and fauna in a number of bright colors. We dyed everything by hand. During my 20 years at the studio, I was trained in various methods of dyeing fabric. I studied everything from using dyes extracted from vegetables and other plants to indigo dye.”

This bingata kimono takes several people a month to complete.

A Sudden Order from the President Leads to Unexpected Success 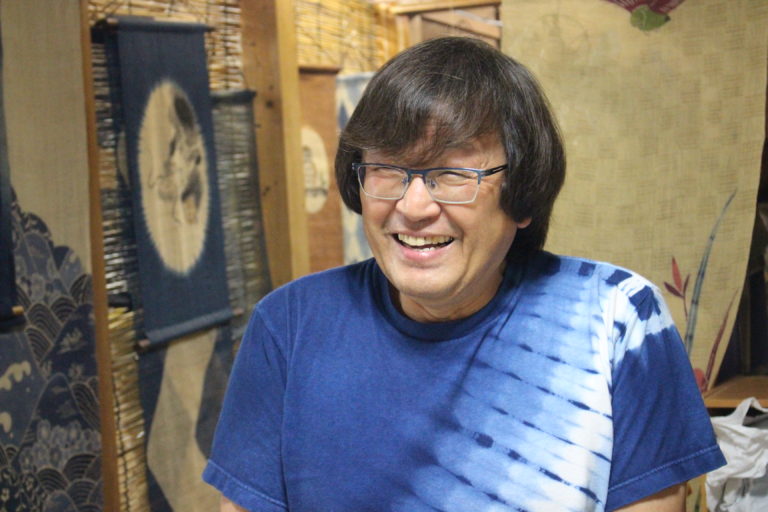 About the time the president of the company told him this, he had come to enjoy his work dyeing the kimono he had designed.

This was at a time where demand for kimono had started to fall little by little. There were 40 employees at that time, but Yoshikawa was the only one chosen for this project.

The president had a strong desire to preserve the kimono tradition, so he wanted Yoshikawa to create some new products that would help support the company financially.

At first, he wasn’t sure what he should make, but gradually he came to enjoy the challenge.

“The very first thing I tried was a noren, a piece of fabric that is hung between rooms in houses or in front of the main entrance of traditional shops and restaurants. I used an old noren design that a previous artisan had left at the company, and it turned out unexpectedly well.” 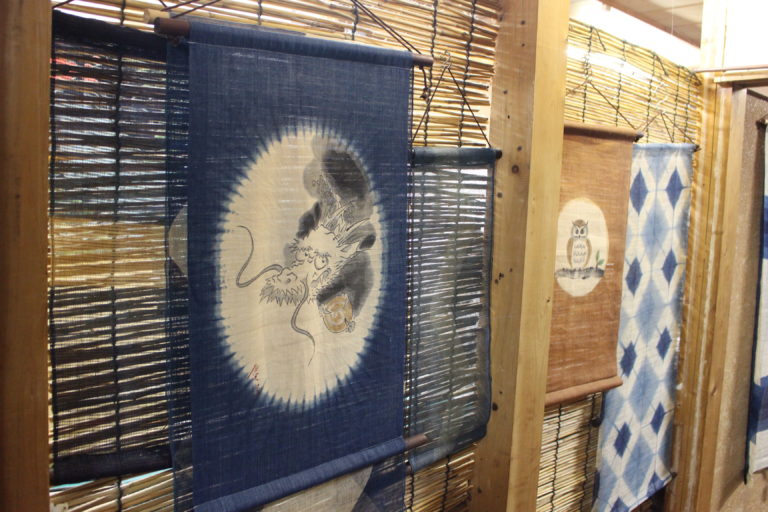 “At this time, cheap noren were available at retail stores, but they often weren’t properly dyed. I designed a fashionably dyed one that could completely change the atmosphere of any store it was hung in.”

“At first, I took ten noren of my design to a retail shop, and they put them up for sale at 18,000 yen apiece. Within a week, all ten had been sold.”

Even as Kuriyama increased the number of patterns and the number of noren available for sale, they always sold out within a week. People started catching on, and as a result, they started getting orders from other places. Eventually, they were selling 1,000 to 1,200 noren a month. It was a great success. After three or four years, the noren were taking in the same amount as all kimono sales throughout the company.

We were so surprised. I was so happy that they were selling so well.

However, the success of Mr. Yoshikawa’s designs was noticed by competing companies. They started to produce similar patterns, and sales started to decrease.

“But, just like with our masks now, every time that happened, we thought about what we could do next. We decided to give indigo-dyed T-shirts a try. Next thing you know, T-shirts were selling like crazy.”

At Kuriyama Studio, all the products that Mr. Yoshikawa made – from noren to tapestries to sun umbrellas – were hits.

“I can’t say why, but it all sold well. I guess it’s natural that other companies would try to copy us. But from that, we would just get more business, because people knew we had made the original products.”

Even though he was being copied by other companies, Mr. Yoshikawa maintained a positive attitude.

Success Goes to his Head; Parting Ways with his Company

With all the product lines he was responsible for selling so well, Yoshikawa had become vital to the company’s success. He says it was in his 19th year at the company, however, that he had an argument with the president for the first time.

“I think I had let the success go to my head a little. I had completely forgotten something the president told me, and that’s what led to the falling out. I ended up saying that I quit, effective immediately.”

After the exchange, when he had had time to cool off, he looked back on the episode and wished he hadn’t said some of the things he did. But since there was no way to undo the past, he and the president agreed that he would move on after training his replacements during a second, calmer conversation.

Mr. Yoshikawa felt a deep sense of obligation to the company, so he spent the next year training those who would take over when he left.

At the end of that year, the company threw him a big going away party; everyone in the company wished him well.

He spoke with great appreciation when he reflected on that time. “All my co-workers gave me this book of farewell messages. I am really glad I was able to work at this company. I still have a good relationship with the president. I feel that my experience at Kuriyama Studio made me what I am today.”

To dye a handkerchief, prices for one person are as low as 1,000 yen.

“Of course, I want to pass on indigo dyeing to future generations. But first, I want more people to know what it is. Indigo dyeing is also my hobby, so I have a lot of fun doing my work.”

No matter how busy he gets, Mr. Yoshikawa always has a smile on his face.

On the day of our interview, a mother-daughter trio had come from Osaka to experience indigo dyeing.

“After going to Yunohana hot springs, we wondered if there was anywhere we could go for a relaxing experience.”
After doing a little research, they stumbled upon Kyoto Hozuai Studio’s indigo dyeing experience.

Yoshikawa appreciates the opportunity to combine his one-of-a-kind experience with other tourist activities in Kameoka.

1. Draw your original design and use rubber bands to bunch the fabric together.

The staff will help you make the bunches in the way needed to achieve the pattern you want.

2. Soak the piece in the indigo dye for the specified time.

3. Rinse in water. All pieces soaked in the indigo must be washed off in water afterward.
Repeat steps 2 & 3 multiple times. You can change the coloration of different parts of your fabric by varying how much you soak them in the dye. 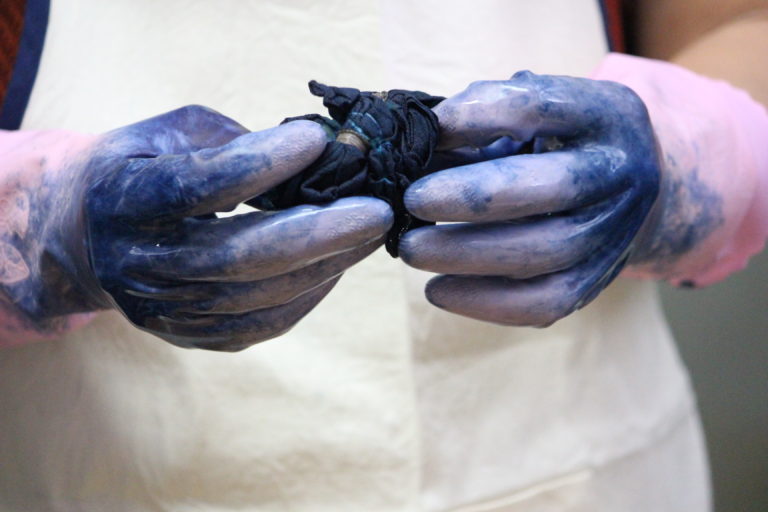 4. After dyeing, rinsing, and wringing out the water, remove all the rubber bands and open up your fabric. This is the most exciting moment.

5. Here are the results captured in a commemorative picture.

(Depending on how you tie off the cloth, you can make flowers, hearts, etc.)

Everyone looked like they had a great time. It was the perfect mother and daughters outing.

Indigo dyeing has been passed down over the ages. Hozuai Studio is passionate about making sure this tradition continues on to future generations.

So, the next time you’re in Kameoka, why not experience Kyoto traditional indigo dyeing at Hozuai Studio?