Locals“Kameoka Time” passes peacefully...
Just being here is an experience... 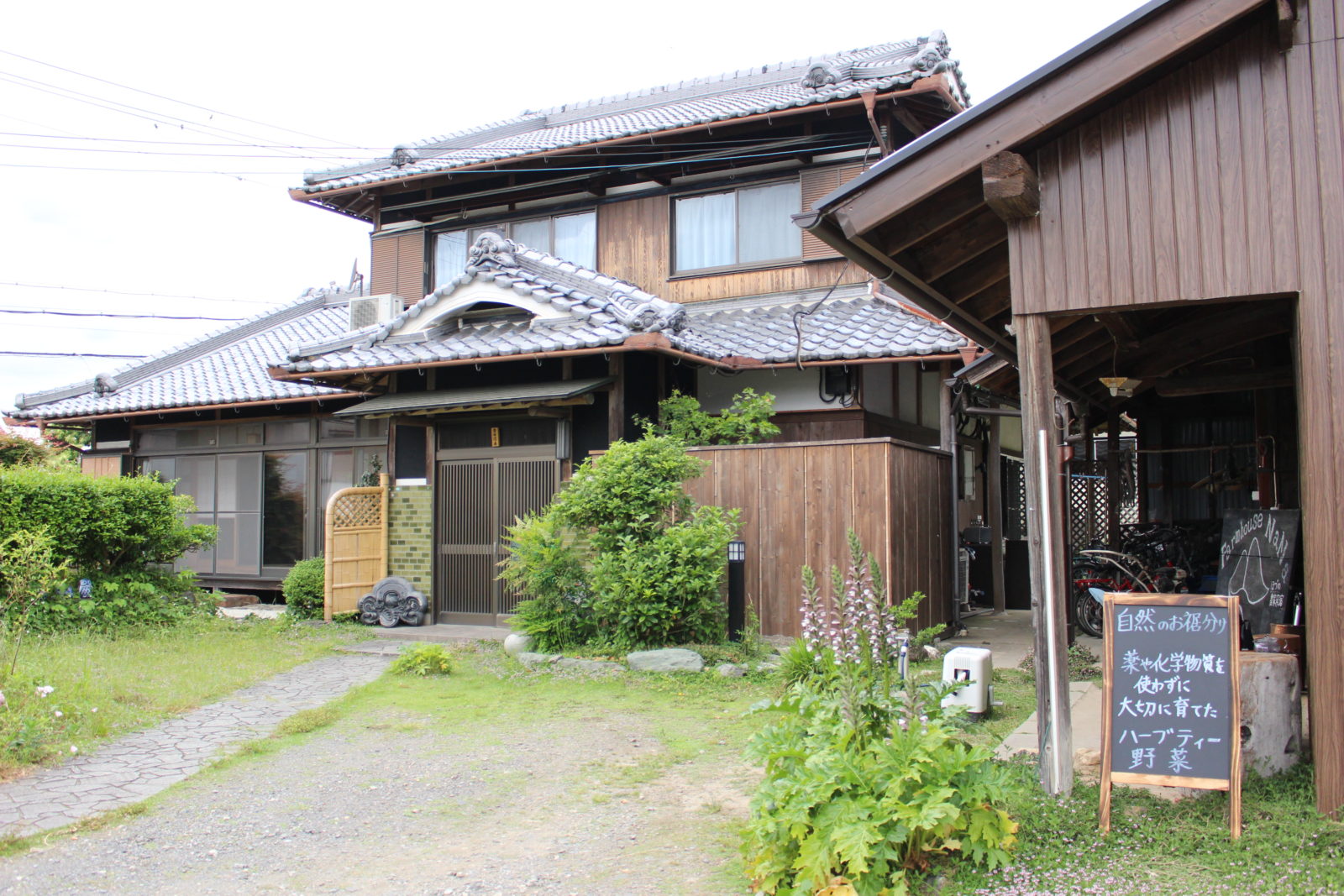 The city of Kameoka, located only 20 minutes away from JR Kyoto Station by train, with a population of about 88,000 people, is a mix of both worlds. The downtown area around Kameoka Station is still urban, but waiting just a few steps away is a sprawling agricultural town full of beautiful rural scenery.

When visiting a town like this, we recommend that you focus your trip on enjoying everything that the countryside has to offer.

A great way to accomplish this is to stay at a “farm guesthouse.” In this post, we will introduce one such place: Farmhouse NaNa. Here, you can experience many different agricultural activities. These include harvesting crops in the fields attached to the guesthouse, meeting the unique and fluffy “Silkie” breed of chicken, and experiencing beekeeping in the nearby garden. Also, located closeby is a glassmaking studio where you can try blowing your own glass. All these activities and more await you at this guesthouse!

Additionally, Farmhouse NaNa is always willing to customize each stay according to guests’ preferences and needs. This level of flexibility adds even more to the charm of your time here.

Mellow Out at a Mellow Guesthouse “I think a ‘do-as-you-please’ holiday is best.”

“For me, you know, I think just laying around here doing nothing is also enjoyable!”

So says the proprietor of Farmhouse NaNa, Sachiko Toyoda. Farmhouse NaNa is located in the agricultural belt of Kameoka, halfway up a small hill in the Hozucho area, where you can take in and enjoy the scenery of the streets of Kameoka.

Compared to life in the city, times passes by more peaceably in Kameoka. Your stay doesn’t have to be a busy one with a schedule crammed full of plans; instead, I recommend that you let yourself fall into rhythm with the slower pace of life here and lay back and relax during your stay. 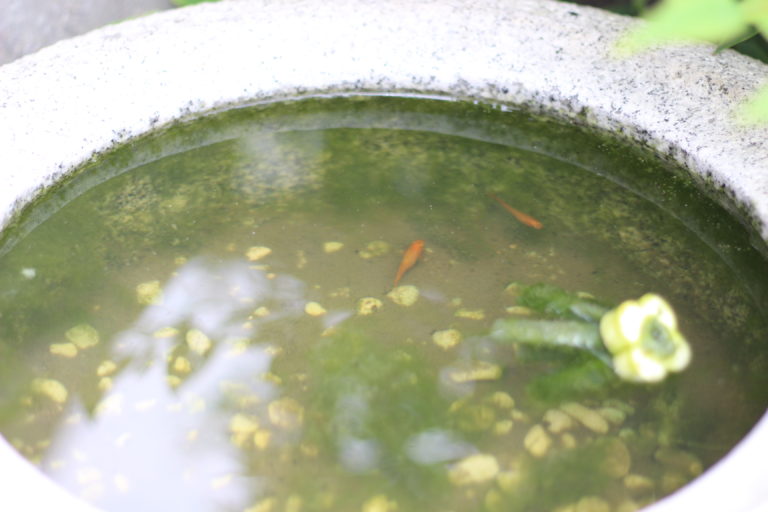 Sachiko has introduced many guests to this way of life. Each guest had his or her own way of spending time at her guesthouse, but Sachiko told us about a particular guest that left a strong impression on her:

The Origins of the Name, “Farmhouse NaNa” 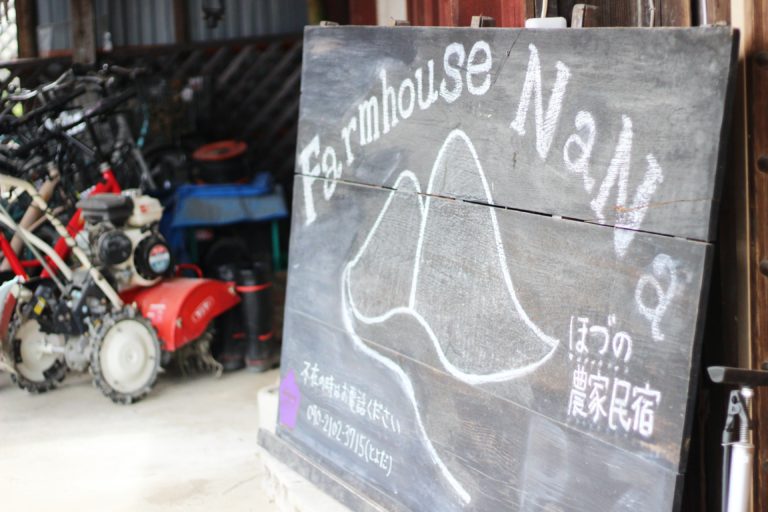 The name “Farmhouse NaNa” represents a part of Sachiko’s personality as well as a feeling that she wants to convey to her guests.

“There are two reasons for the name. One reason is a good one, but the other…not as good. Shall we start with the not-as-good reason first? ‘Naanaa’ means ‘let’s take it easy’ or ‘mellow out.’ That kind of sounds like it has no energy, right? [laughs] But I meant it in a good way: ‘if there’s something to do, let’s do it, but if not, let’s take it easy!’ It’s okay to leave things unplanned and relax. We want all kinds of people to visit, so even though we don’t make a lot of set plans or itineraries, we’re always on the lookout for new experiences to offer the guests.”

The second meaning of “Farmhouse NaNa” comes from a warm family memory of Sachiko’s.

”’NaNa’ is my daughter’s nickname. Her real name is ‘Hikaru,’ but when my son, who has a speaking disability which limits the sounds that he can pronounce wanted to call to his sister, he couldn’t say her name. He would say, ‘naanaa’ instead. ‘Naanaa’ is what he would call things that he liked; socks, watermelons, whatever. So, he also called his cute little sister that, as well.”

“When we decided on the name for this guesthouse, my daughter said, ‘names where the same sound is repeated twice would be good because they are easy to say and endearing,’ so we used a name that was already familiar to my family: ‘NaNa.’ It’s a great memory for us.”

A Place That Connects Her Childhood with the Present

Sachiko has enjoyed the abundant nature found in the countryside since she was a child.

“There were rice paddy fields in my hometown when I was a kid, and I would often go to them to catch frogs and other animals. When I grew up, I went to live in the city, but I often found life there uncomfortable and it didn’t agree with me.”

So, there was a time in her life after becoming an adult where Sachiko was attracted to life in the city, but now, after experiencing that, she realizes that she enjoys a life where she can be in contact with nature more. 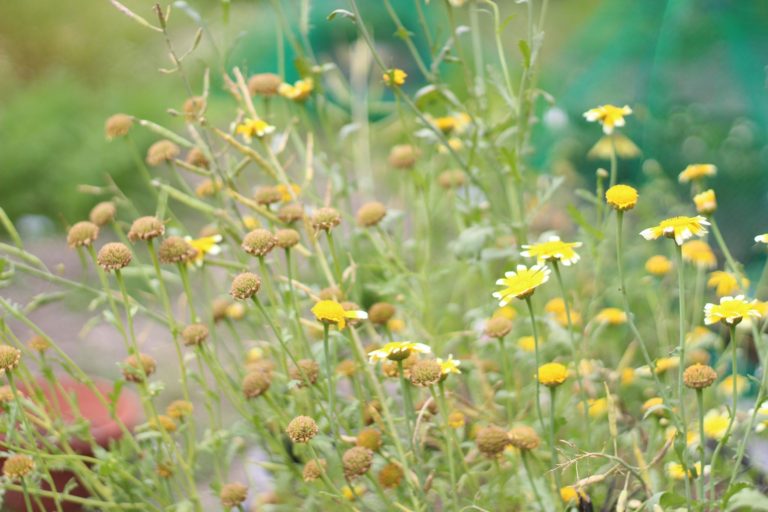 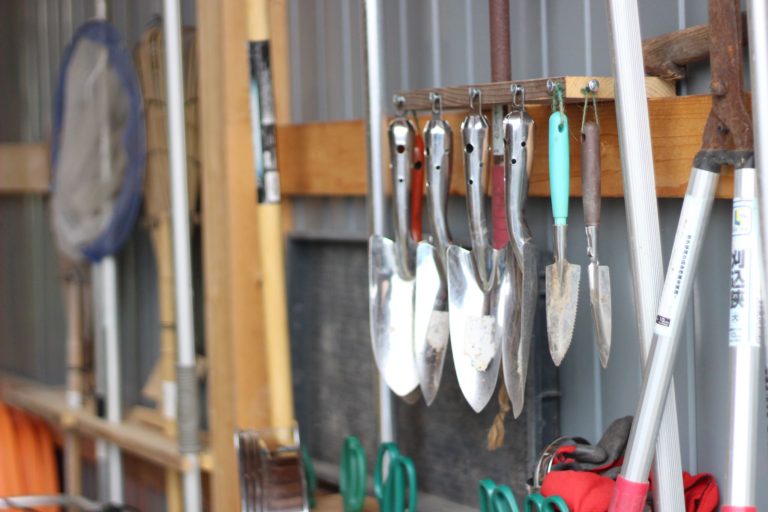 Finding the House and Working in the Fields

Sachiko was now a new home owner. Her vision of a guesthouse began to emerge.

She found the house by chance through a real-estate-agent acquaintance of hers. Sachiko was delighted with it because the atmosphere of the house and the surrounding layout of the streets and houses reminded her of her grandparents’ home. 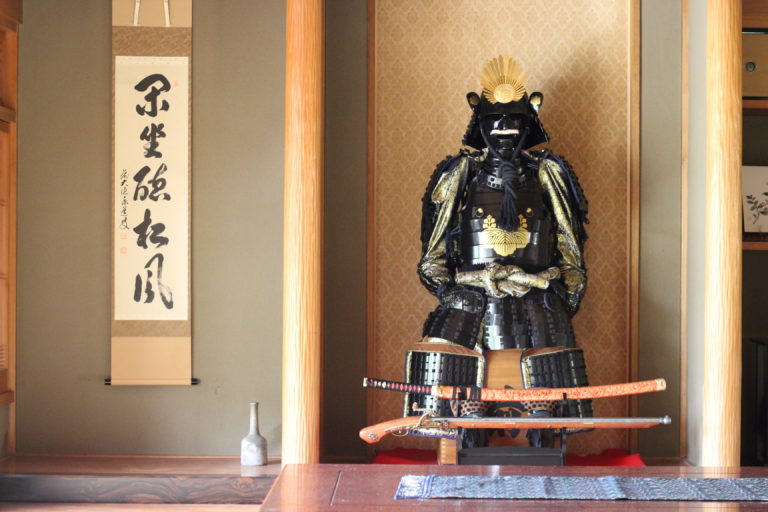 In the yard at Farmhouse NaNa, there are many flowers and fruit trees, and the fields too are overflowing with variety.

“I don’t come from a farming background, so I’m really just playing it by ear. I want to recreate the fields that I played in as a child at my grandparents’ house, I guess. 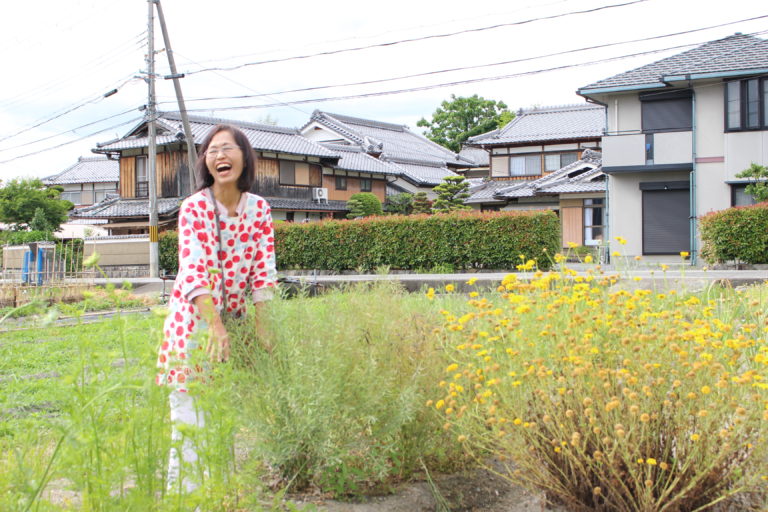 “Basically, the vegetables that I raise are mostly the ones that I want to eat. I’m also raising herbs that people have given me and making herb tea.”

As she said this, she poured warm water over some mallow flowers which produced a tea of a beautiful bluish hue and offered it to me. It was delicious. 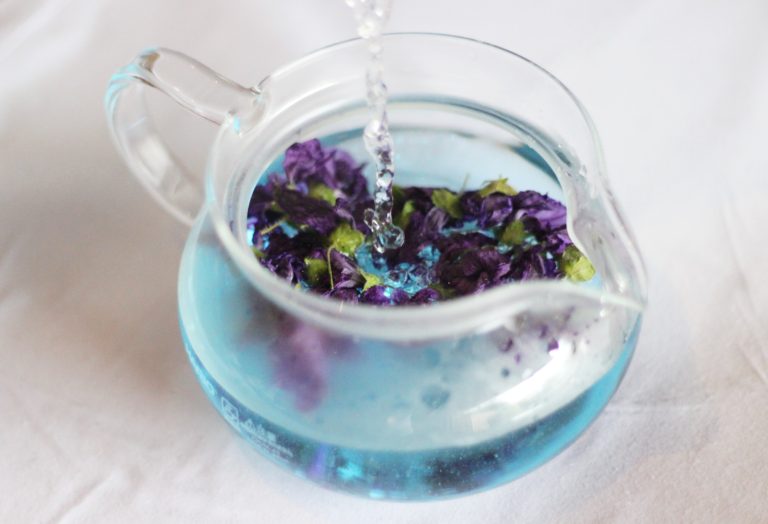 Your plans for the future?

“In the future, I’m thinking that I want to keep working on farming. Of course, I’ll keep running the guesthouse at the same time, though. But I’ll be working in the fields, so just holler if you need me. [laughs]”

“I grow all of my vegetables without using pesticides, herbicides, fungicides, or artificial fertilizers. Everything is just growing wild naturally, and even then, everything turns out alright. I realized the weeds grow without any help, and so do vegetables.”

Sachiko likes salad, so against her better judgement, she has grown a ton of salad vegetables. Lettuce, Japanese radishes, and the like. “I like growing them too much,” she says with a smile. 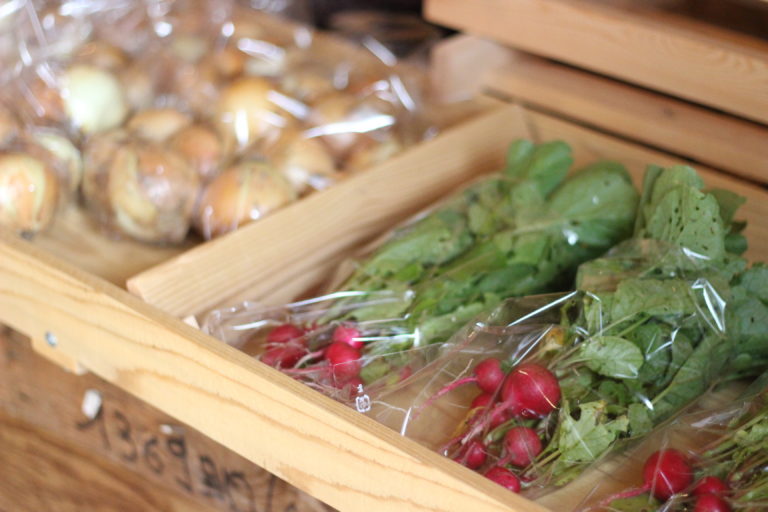 Farmhouse NaNa doesn’t just have fields for growing vegetables and a garden, there’s also a kitchen equipped with a traditional wood furnace used as a cooking stove. Rice cooked with this stove is a culinary delight! A pizza oven is also being added to the kitchen! 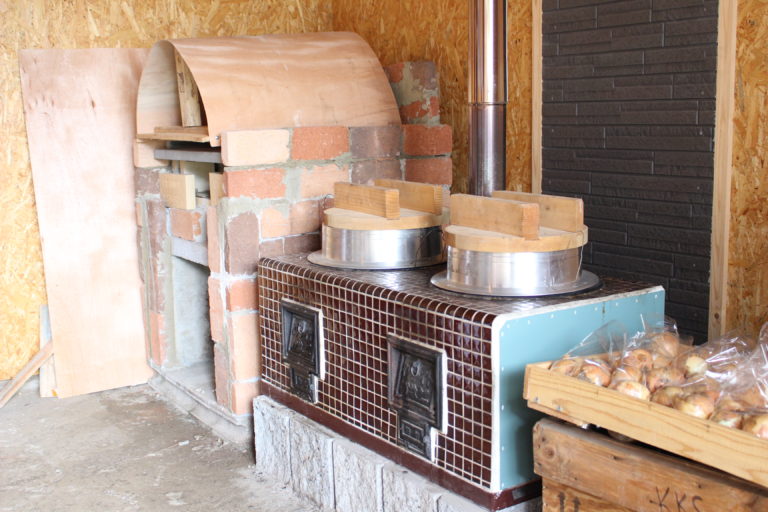 In a place such as this, where you can have so many great countryside experiences, I recommend spending a relaxing two or three days.

Mellow out and spend some quality downtime at Farmhouse NaNa while enjoying the taste of vegetables fresh from the field. Doesn’t that sound good? Sachiko will be waiting for you with a smile!